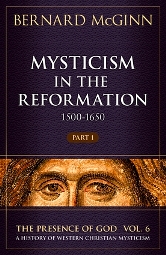 From its emergence as a comparative discipline
in the mid-nineteenth century, the study of mysticism has been a lightning rod for many of the controversies that haunt religious studies. From spirited debates between proponents of perrenialist and constructivist approaches, to charges of orientalism and disputes over the validity of comparativism, the study of mysticism can be almost as mystifying as its object. For this reason—among others—students of the history of mysticism owe a debt to Bernard McGinn for his lucid and elucidating treatment of the intellectual and social history of mysticism in the western Christian tradition.
Since 1991, McGinn has produced five massive works in his series,
The Presence of God: A History of Western Christian Mysticism.
The present work, Mysticism in the Reformation 1500-1650, constitutes part 1 of volume 6; parts 2 and 3 are forthcoming.

McGinn's command over a bewildering amount of materials, his philological expertise, and his ability to make complex subject matter accessible have done much to historicize our understanding of the mystical component of Western Christianity. In the present volume, McGinn trains his expert eye on the relationship between this heritage and the complex intersection of events, individuals, and ideas grouped heuristically under the rubric of the Reformation. While subsequent parts will focus on Catholic mystics, here McGinn limits his exploration to a diverse group of Protestant mystics, mystically inclined theologians, and contemplative poets.

A significant amount of scholarship separates us from when the Anne Fremantle and
W. H. Auden felt compelled to mount a careful refutation of W. T. Stace's insistence that "there are no Protestant mystics" (The Protestant Mystics, Weidenfeld and Nicholson,1964). However, much work still needs to be done to tease out the complexities of the relationship between the history of Protestantism and the inheritance of the ancient and medieval mystical traditions. The present volume marks an important step forward. McGinn argues eloquently against those "who contend that the Protestant branch of Christianity was not favorable to mysticism and therefore had few, if any, important mystics" (301). He leaves no doubt—at least in this reader's mind—that Protestant mysticism is at once "a necessary category," and a field of study that promises to richly reward the patient scholar (301).

In line with his previous studies, McGinn champions an understanding of mysticism that is historically contextual, inextricable from the theologies, doctrines, and rituals in which it is embedded. However, this is not to imply that McGinn is concerned with deconstructing the category of mysticism itself. While forays into perrenialist speculation and the phenomenology of mystical experience are eschewed, McGinn does treat mysticism as a phenomenon qualified by a certain amount of continuity between its local expressions. McGinn presents the "mystical element"— a turn of phrase that underscores his commitment to avoiding language that isolates mysticism from its immediate historical context—as "the aspect of religious life that seeks a deep and transformative sense of the direct presence of God" (3). Subsequently, McGinn avoids reducing mysticism to the "monolithic phenomenon" of unio mystica, the ecstatic union between creature and creator, which allows him to consider a broader range of subjects (4).

In the first chapter, McGinn treats the towering figures of Martin Luther and John Calvin. The relationship of these foundational reformers to mysticism has been a subject of considerable debate: assessments range from assertions that both were mystics of the first order to blunt disavowals. McGinn contends that Luther's relationship with the heritage of the mystical tradition was a complicated affair, characterized by a sic et non attitude, while Calvin, despite employing certain mystical tropes, was far less amenable to the mystical. By examining each reformer's relation to mysticism as an intellectual and textual tradition, McGinn avoids knotty issues regarding whether or not his subjects may have experienced states that could be termed "mystical."

In chapter 2, McGinn employs the rubric of the "Radical Reformation" to explore
Andreas Karlstadt, Thomas Müntzer, Hans Denck, Sebastian Franck, and
Valentine Weigel. Weigel, who synthesized Neoplatonic, Hermetic, and alchemical ideas with his native Lutheranism to create an interiorized vision of Christianity, as critical of institutional religion as it was mystical, emerges as an especially interesting figure. McGinn concludes that, while one cannot speak of a homogeneous strain of mysticism proper to the radical reformers, they developed various forms of mystical Christianity that combined a focus on interiority with a wariness of orthodoxy.

The penultimate chapter focuses on Johann Arndt and Jacob Boehme, two fascinating seventeenth-century figures. The complexity of these two writers makes them challenging to cover in the scope of a single chapter. It is therefore all the more impressive that McGinn manages to outline the key points of their theologies as well as assess them within the framework of his own study to demonstrate that, despite entrenched stereotypes, both figures "testify to the power of the mystical element in Lutheranism" (196-97). As an aside, McGinn's recognition, despite being justifiably included within the history of Christian mysticism, that Boehme does not fit comfortably into any one "tradition" of thought is insightful. However, as it is pertinent to the work of both his subjects, the chapter could have benefitted from a more sustained engagement with how Western esoteric discourses such as alchemy, Hermeticism, and Kabbalah helped transform elements of the medieval mystical tradition.

The last chapter explores the mystical dimensions of the English Reformation, treating both the work of those who aligned themselves with the Elizabethan Settlement that established the Anglican Church and the so-called Puritans, who distanced themselves from this development. Though it is unfortunate that the chronological parameters of the volume necessarily exclude such fascinating seventeenth-century figures as John Pordage (1607-1681) and Jane Lead (1624-1704), McGinn provides a fascinating glimpse into the mystical dimensions of Anglican poets such as John Donne, George Herbert, and Henry Vaughan. These poets do not fit the conventional paradigm of the mystic without qualification: while their poetry undoubtedly treats metaphysical and mystical themes, how "mystical" one ultimately concedes these writers to be depends upon how intimately one imagines mysticism to be bound up with claims to supranormal experience. McGinn adroitly justifies the inclusion of these poets within the history of mysticism, while avoiding essentializing claims.
In conclusion, McGinn contends that the German and English Protestants who appropriated elements of the mystical tradition did not so much change "the traditions of mystical teaching themselves," but rather "the relation of mysticism to the other elements of religion in the complicated world of 1500-1650" (3). Most significantly, an element of anti-institutionalism was added to the discourse of mysticism.

Mysticism in the Reformation 1500-1650 will be valuable to students of mysticism and the history of Christianity, as well as those working more generally within this milieu. Additionally, McGinn's work will be of relevance to those interested in complicating simplistic bifurcations of the history of Catholic and Protestant religiosity. Due to McGinn's talent for matching erudition with clear, lucid prose, both specialists and more general readers will no doubt find much of interest here.
Joshua Levi Ian Gentzke
recently completed his doctorate
in modern religious thought, ethics, and philosophy at Stanford University.
Date of Review: September 14, 2017
About the Author:
Bernard McGinn is the Naomi Shenstone Donnelly Professor (emeritus) in the Divinity School of the University of Chicago. A premiere scholar of Christian mysticism, he is the author of several influential and bestselling titles, including Meister Eckhart: The Man from Whom God Hid Nothing and Doctors of the Church.
This volume is Part 1 of Volume 6 in Dr. McGinn's magisterial Presence of God series.