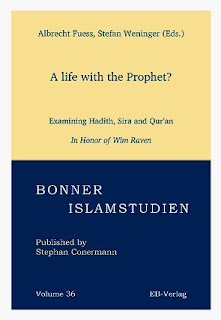 Albrecht Fuess / Stefan Weniger (eds.):
A Life with the Prophet.
Examining Hadith, Sira, and Qur'an
in Honor of Wim Raven

Verlagsbeschreibung
The present study presents a comprehensive insight into actual trends in academia in Arabic literature and Islamic studies. In this respect, the contributions pay tribute to Wim Raven, an outstanding scholar of early Arabic literature and the formative period of Islam and someone who always had new and surprising twists and turns in his research and scholarly productions. The same holds true with the papers presented here. Robert Hoyland presents us with his reasoning about the origin of the term “aʿjamī language” in the Qur’an. Was this really a “non-Arab” tongue as later tradition would have it, or would it be better to classify it as a “North-Arabian” dialect? Anna Akasoy deals with “chick lit” in the Hijaz and the modern image of Aisha as Muslim role Model. Remke Kruk looks at famous warrior women in pre-Islamic literature and their relation to the forthcoming Prophet Mohammed. Jan Just Witkam provides us with the story (Arabic edition and English translation) of a young man setting out from Damascus, travelling further north looking for adventures, fighting monsters, losing his wife, marrying a second one, then a third one, only to find out that she can transform into a gazelle: Indeed, this story has it all! And it provides a good insight in Early Islamic Story telling. Finally, Hans Daiber explains how the thinking of Aristotel’s Organon became included and modified in Ibn al-Muqaffaʿs (d. 140/757) Kitāb al-Adab al-kabīr (Great Book of the Rules of Conduct). Central themes of his contributions are the pursuit of knowledge, wisdom, virtue and friendship as motors for human behavior.

Albrecht Fuess is a Professor of Islamic Studies at the Center for Near and Middle Eastern Studies (CNMS) at the Philipps-University Marburg. He specialises in the Social, Political and Economic History of the Middle East (13th–16th centuries) and the contemporary Muslim presence in Europe.
Stefan Weninger is a Professor of Semitic Studies at the CNMS at the University of Marburg. He specialises in Comparative Semitic Linguistics in a very broad sense, Semitic Epigraphy, Classical Arabic language and literature and the study of Old Ethiopic language and literature.
Leseprobe: hier