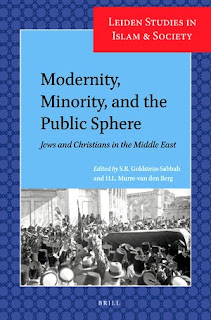 Modernity, Minority, and the Public Sphere: Jews and Christians in the Middle East explores the many facets associated with the questions of modernity and minority in the context of religious communities in the Middle East by focusing on inter-communal dialogues and identity construction among the Jewish and Christian communities of the Middle East and paying special attention to the concept of space.This volume draws examples of these issues from experiences in the public sphere such as education, public performance, and political engagement discussing how religious communities were perceived and how they perceived themselves. Based on the conference proceedings from the 2013 conference at Leiden University entitled Common Ground? Changing Interpretations of Public Space in the Middle East among Jews, Christians and Muslims in the 19th and 20th Century this volume presents a variety of cases of minority engagement in Middle Eastern society. S.R. Goldstein-Sabbah is a Ph.D. candidate at Leiden University in the Netherlands. She is a member of the Arabic and its Alternatives: Religious Minorities in the Formative Years of the Modern Middle East (1920-1950) research project funded by the Netherlands Research Council (NWO). Her research interests focus on the history of Jews in the Arab World. Prior to her doctoral research she worked in academic publishing. Since June 2015, H.L. Murre-van den Berg (Ph.D. Leiden University, 1995) serves as the director of the Institute of Eastern Christian Studies at Radboud University, Nijmegen. Earlier, she taught history of World Christianity at Leiden University. She has published extensively on Christianity in the Middle East, especially on the Syriac/Assyrian traditions and the interactions between Western and Middle Eastern Christians in the period from 1500 onwards. The current volume results from a research project funded for by the Netherlands Research Council (NWO): Arabic and its Alternatives: Religious Minorities in the Formative Years of the Modern Middle East (1920-1950).